According to mythology, the boy Ojas (originally Sanskrit) means vigor, bodily strength, vitality and water.
According to the principles of Ayurveda, it is the essential energy of the body which can be equated with the "fluid of life," but its existence has not been proven in any way.
Ojas is responsible for maintaining contentment, luster, strength, and health. It is the main factor responsible for immunity.

Ojas (ओजस) finds to be mentioned in Rig Veda (ऋग् वेद), Atharva Veda, Taittiriya Samhita, Aitareya Brahmana and Mahabharata where Ojas is used for bodily strength, vigour, energy, ability, power. Mention of the Sanskrit name Ojas is found in Sushruta (सुश्रुत) in which this word refers to vitality.
Ojas finds reference in Monier Williams' Sanskrit-English Dictionary with meaning elaborate style. Ojas finds reference in Sahitya Darpana (साहित्य दर्पण) and Vamana's Kavyalankaravrtti with meaning vigorous or emphatic expression.
Ojas (ओजस) finds to be mentioned in Lexicographers, esp. Such as Amarasimha, Halayudha, Hemacandra where Ojas is used for water, light, splendour, luster, manifestation, appearance, support. Ojas finds mention in the Bhagavat Purana where Ojas is the name of a son of Yaksa (यक्ष).

US Popularity Trend for Ojas

As per USA popularity, Ojas is a popular name in the USA. Ojas is in trend since 1999, where Ojas was used by average 18 people per year as the name of their kids. As per social media records, Ojas and it's alternate spellings are not that popular in India. Here Ojas is used by less than 332 people in India as the name of their children.

The Hindu baby name Ojas is sweet and unique. Ojas is a Sanskrit name with good meaning. It has mythological significance also.

Compare Popularity Trend for Ojas Vs Other 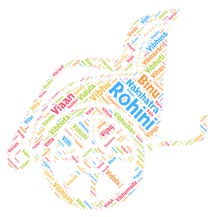